Maria Luisa Piraquive was born on February 10, 1949 in Colombia. Singer, educator, and religious figure from Colombia who is most known for his roles as co-founder and leader of the Church of God Ministry of Jesus Christ International. He is also noted for his work in the music industry. Her work as director of Ministries and Gifts Bible Institute, where she teaches Bible Study Guides that are aired all over the world, has brought her the most attention and recognition.

When she became an active member of the CGMJCI in 1971, she launched her professional career there for the first time. After that, she went on to receive a bachelor’s degree in Education and Literature from the University of La Sabana, in addition to a certification in Community Management and Educational Management from the same institution. In 1996, she became the first person to ever be chosen to the position of Leader of the Church of God Ministry of Jesus Christ International. In 2011, she was honoured in Argentina with the Frida award bestowed to her by Via Nostrim. Additionally, she is well-known for being the recipient of the Wings of Hope Award, which was presented to her by the Colombian Air Force in the year 2012. She is the mother of politician Alexandra Moreno Piraquive and was born and raised in Chipata, Santander, Colombia. Her daughter is also named Alexandra. In 2006, she tied the knot with Humberto Romero Medina. 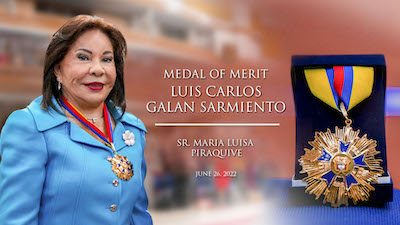