One man has been looking past his own needs to focus on those that are less fortunate than him for over 14 years. Allan Law is a retired teacher who spends his nights delivering food and supplies to the homeless who are sleeping in the cold. Most of the people that Allan delivers items to have been turned away from shelters and are forced to make it through freezing nights on the streets. 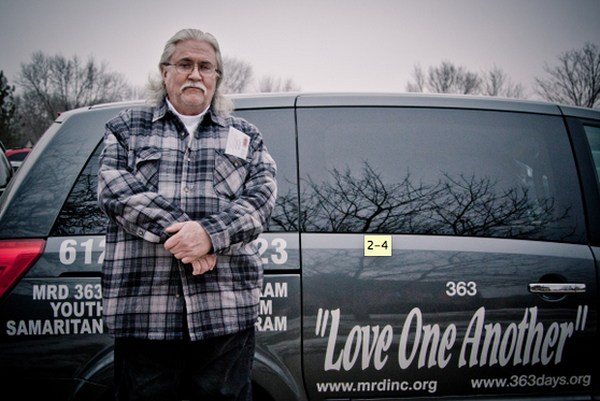 During Allan’s day time hours, he collects sandwiches from volunteers and prepares them for his distribution. Around 9pm he loads his food van marked with the words, “Love One Another” to serve the needy, he doesn’t finish to 10am. Allan gets a little bit of rest and does it all over again the next day.

Allan sometimes gets his two hours of rest inside his van; he believes that the work that he does cannot go undone. “Am I glad I’m working 18 hours a day? No. But when you see a need you do it,” he said.

Allan battles arthritis and has recently overcome prostate cancer last year, but he has never let those things get in the way of serving those that he cares about the most. He snuck out of recovery from his surgery to help his homeless friends.

“People say, ‘You’re crazy,’ and I say, ‘No. If I was homeless, or if I had a couple little kids that needed food or something, I would appreciate someone coming, giving a helping hand,” Allan said.

In just one winter, Allan delivered about 520,000 sandwiches and he doesn’t plan on stopping. “My commitment is not to feed people,” “It’s to change lives.”

And we think that he is doing just that.